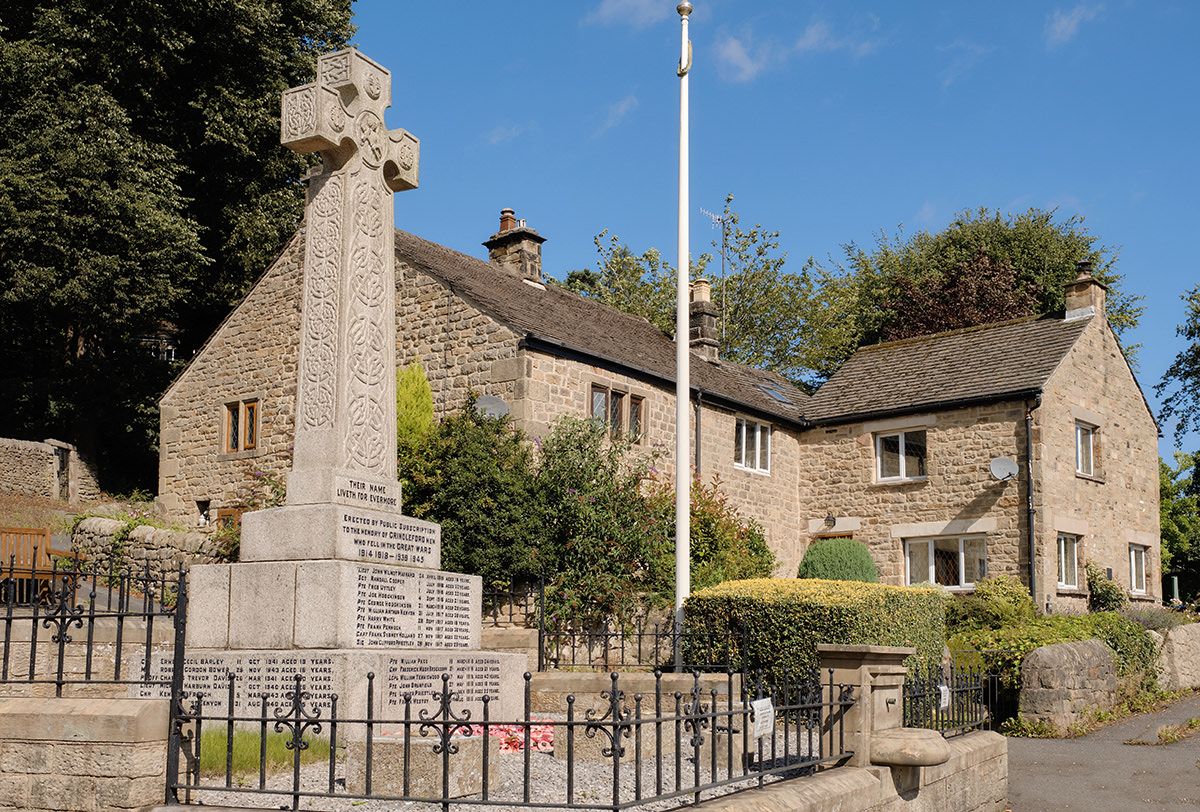 Our impressive War Memorial is situated in the area known as The Green. This, in days gone by, was the village centre with a Post Office and Kenyons, the large village store. Kenyons was situated on what is now the Hotel car park.

On the surrounding walls of the Memorial we can see evidence that water used to drawn here. These days we have a more sustainable supply!

The Cross itself is likened to the Saxon Cross in Eyam churchyard and was constructed by an Eyam man named Arthur Dane. It is thought that he made others in the area – any information on this would be appreciated.

The unveiling and first dedication of the Memorial took place on Easter Day, March 27th, 1921, there being a large number of people to witness the occasion. The second dedication was on November 9th, 1947, held in order to commemorate the names of the fallen servicemen of the second World War.

The Memorial is registered in the records of War Memorials, held in the Imperial War Museum in London. It is unusual in that the actual date of the servicemen’s death is inscribed as well as the year.

On a sombre note, it can be seen that there were many losses from what was then a much smaller village than we have at present.
I have noted the death of F. Pennock in November 1917 and then of his two sons – F. Pennock Jnr, in May 1941 and C. Pennock in September 1942. Tragic losses from just one family.

In 2015, the Grindleford Branch of The Royal British Legion was disbanded and Mr. & Mrs. Ashforth and Mr. Waterall continued to maintain the site. It is now the responsibility of the Parish Council to keep the Memorial in good order and as I live in close proximity, I have taken on that care of duty along with others.

Every year on Remembrance Sunday, the residents of Grindleford gather to remember the Fallen.
Please join us this year if you can.

Ask us a Question

Ask us a Question

Please don’t hesitate to get in touch with us. Either fill in the form or email us.
Your communication will go to the Clerk to the Parish Council, who will endeavour to get back to you as soon as possible.

Or
E-Mail
Scroll Up